An essential aspect in the mining industry is productivity, so when choosing a team, there can be no room for any misunderstanding. The shovels are fundamental machines in the tasks of loading and the combination that these must have with the trucks generate that infallible match that only the manufacturers of heavy machinery can guarantee.

Electric cable shovels (also called electromechanical shovels or simply cable shovels) and hydraulic shovels are the most used loading equipment in open pit mining. The former have a greater load capacity; This is a characteristic that companies take into account when acquiring these strengths of the industry that compete with the front loaders and the rotopalas. 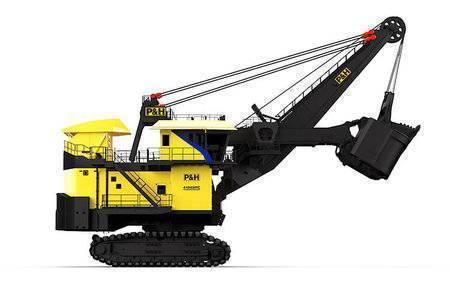 This excavator - manufactured in series since 2009 - is equipped with commands and motors for alternating current (AC) which allows a pass time of 30 to 32 seconds , making it faster with respect to the blades with DC motors . It also has a Centurion control system and the PreVail platform for monitoring.

With this P & H team next to the L-2350 , also in the hands of the Japanese company; Komatsu consolidates itself as one of the strongest competitors in the market by owning two of the largest machines needed in the mining industry. Well, the Komatsu P & H L-2350 wheel loader - produced at the time by LeTourneau - is a giant excavator that can take 72 tons of material at once (160,000 pounds) and raise it to 24 feet in the air. Makes with haul trucks with payload ranges from 320 to more than 400 tons. This supermachine hybrid has a diesel engine generator of alternating current and electric traction by engines on wheels that reach up to 4 meters. It is the most powerful and productive tire loader that exists.

But, as Caterpillar wants to be in the market game, it acquired Bucyrus since 2011 and incorporated its equipment into the offer. The company has hydraulic shovels from 6 m³ to 52 m³, with diesel or electric motor such as the 6050 ( 2,500 HP and 1,880 kW ), the 6060 (made to measure for trucks with 4 passes of 218 metric tons, such as the Truck 793D Cat and the MT4400D Truck AC) and the 6090; as well as electric shovels of up to 80 yd³ like the 7495, the largest equipment currently offered by the company. It has 20 meters of height and an operation weight of more than 1,300 tons. It can load between 30.6 and 61.2 cubic meters of material and a lifting power in the 2,600 HP engine. The hydracrowd system stands out because it eliminates the need to change the push and pull cables.

The 6090 is Caterpillar's largest hydraulic shovel driven by 4500 HP, with a payload of 94 metric tons and bucket capacity of 68.0 yd³. The only hydraulic mining shovel that can be used with 4-pass 393 metric truck loads, such as the Cat 797F .

This equipment is combined with the Bucyrus RH400, also owned by Caterpillar. This front shovel excavator has a pthat of 889 tons, with a starting force of the spoon of 2,400 kN and driven by two diesel engines with a maximum power of 4,400 hp at 1,800 rpm.

Hydraulic shovels from Liebherr and Hitachi

The Liebherr Group develops smaller and hybrid equipment with a technology that allows to reuse the hydraulic energy generated while operating and to re-enter it into the work cycle. The R9800 produced since 2008 in France has a total weight of 810 tons, a bucket capacity of 42 m³ and a starting force of 1,760 kN.

Meanwhile, Hitachi manufactures hydraulic shovels ranging from 112 to 811 tons of operational weight and which can be configured as front or backhoe. The EX8000-6 launched on the market in 2012 weighs 811 tons, has a bucket capacity of 45 m³ and a blade capacity of 40 m³ that can eliminate up to 75 tons in a single load.

According to the Mining Equipment Cadastre 2013-14, prepared by the Editorial Editec Group before the purchase of Joy Global by Komatsu, it is verified that the market of the shovels in Chile is led by P & H (of Joy Global), with 38% of participation, followed by Caterpillar (34%), Komatsu (23%) and Liebherr (5%). And among the 128 teams in total accounted for, 73% include the cable shovels and 27% the hydraulics. Caterpillar provides both types of blades, Joy Global only electric, while Komatsu and Liebherr only hydraulics. Today these numbers benefit the Komatsu company as a result of its acquisitions, since it diversified its equipment and offers all kinds of shovels.

Between 2011-2013 between 17 and 18 shovels were imported to Chile , the largest amount for those last years, because in the following period, imports began to decrease. As of April 2017, only one P & H 4100 unit had been imported according to the report of the Market Analysis of critical inputs in copper mining (2017) prepared by Cochilco (Chilean Copper Commission).

This same report reveals that 50 hydraulic shovels are operating in different projects in Chile. The ones that stand out are the models PC8000 and PC5500 of the company Komatsu with capacities of bucket from 29 m³ to 42 m³ 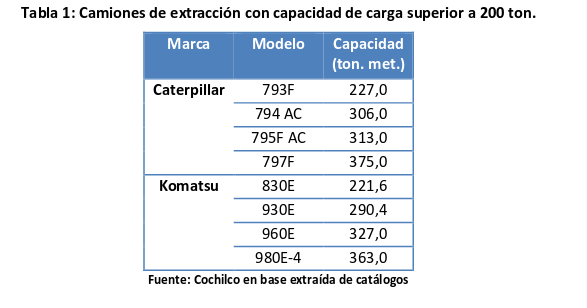 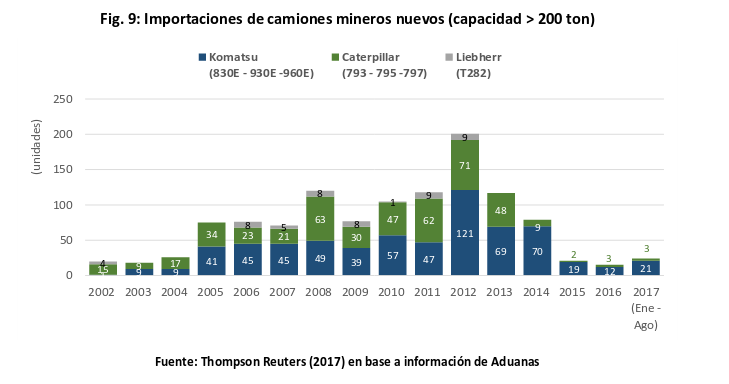 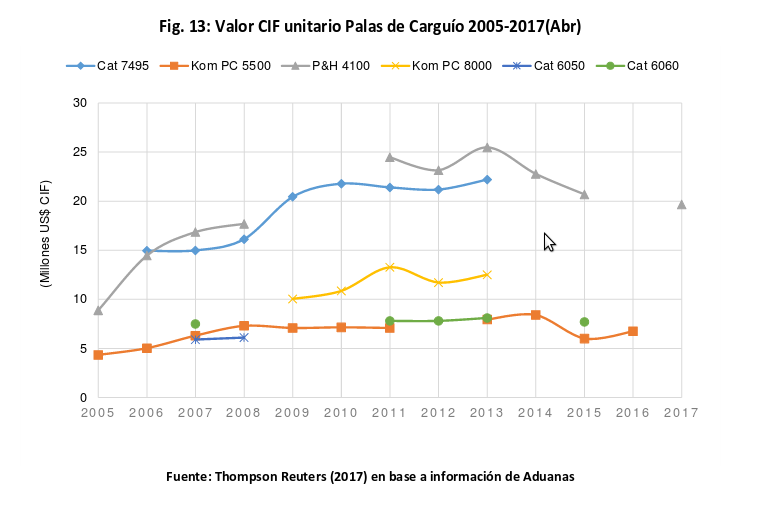 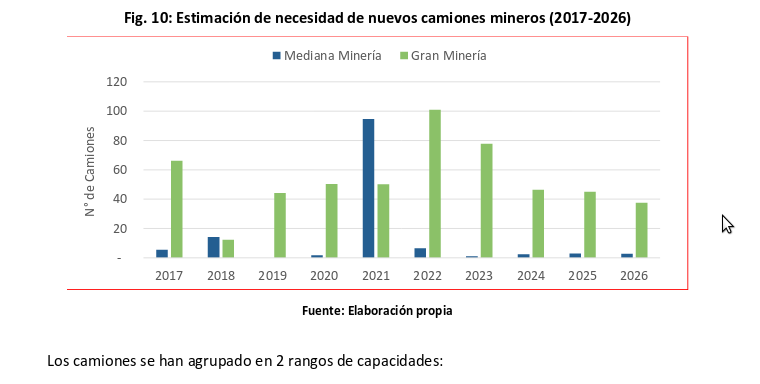